Today was the day that the science finished and we started the long trek to Vigo. The ROV had gone into the water the previous evening for its last outing of the cruise, devoted mainly to the collection of mid-water animals. However, we – the benthic biologists – were allowed the final two hours of the dive for a frantic effort to collect some important benthic animals that had eluded capture. These were mainly tiny semi-transparent holothurians that were very difficult to pick out on the video screens against the background of the seafloor. But Andrey is an expert on these creatures and  he spotted several of them, virtually invisible to the rest of us peering at the screens, which we were able to capture with the slurp gun. Then it was time for the ROV to lift off and return to the ship. We were given a great send off from the Mid-Atlantic Ridge by a beautiful red shrimp, which put on a wonderful display in front of the ROV, swimming powerfully with its long, delicate antennae streaming out behind it in two parallel lines.

The dive over, I spent most of the rest of the day tending my collection of xenophyophores. These giant protozoans construct a ‘test’ up to 10-cm or more in size from particles that they pick up from the seafloor – pretty impressive for a single cell. Recent analyses of their DNA reveals that at least some xenophyophores are foraminiferans. Several species of this ‘protozoan megafauna’ have appeared regularly in videos and still photographs of the seafloor throughout the cruise. The most common species has a dome-shaped test covered in what appear to be small holes. These are actually openings in an intricate lattice of tubes that make up the structure of the test. In seafloor images, the holes are often partly obscured by a coating of sediment, probably trapped by the organism as a source of food. The elegant test of another species (?Homogammina sp.) comprises smooth, rounded, sinuous ridges and lobes. From some angles it resembles a piece of modern sculpture. Xenophyophore tests are often extremely fragile and the ones that we have been collecting can be cut through with a piece of stiff paper. If you touch them they crumble, so removing specimens from the surfaces of cores is a tricky operation. Having recovered them intact, it is necessary to photograph the tests before they fall apart. 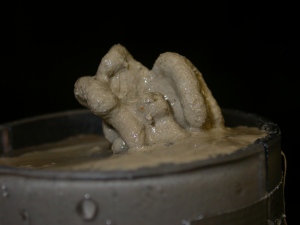 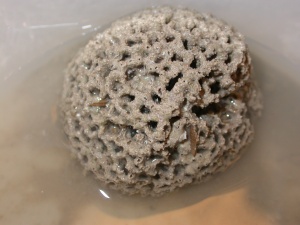 The most common xenophyophore in the ECOMAR area is called Syringammina fragilissima, a particularly appropriate name for such a delicate creature. This species is widely distributed at bathyal depths around Western Europe, but this is the first record of it from a central oceanic area. We also collected one specimen of a second Syringammina species that I have seen in the Whittard Canyon, the SW of Ireland. So there appear to be close links between the xenophyophore faunas on this part of the Mid-Atlantic Ridge and those around the margins of Western Europe.

This entry was posted in Uncategorized. Bookmark the permalink.